On 4 October 2019, join everyone as we celebrate World Smile Day®.

A commercial artist from Worcester, Massachusetts by the name of Harvey Ball created the smiley face in 1963. That image went on to become the most recognizable symbol of good will and good cheer on the planet. However, as the years passed, Harvey Ball became concerned about the over-commercialization of his symbol, and how its original meaning and intent had become lost in the constant repetition of the marketplace.  Because of that concern, he was able to come up with the idea for World Smile Day®. He thought that we, all of us, should devote one day each year to smiles and kind acts throughout the world. According to him, the smiley face should know no politics, no geography and no religion.  Harvey’s idea was that for at least one day each year, neither should we.  He declared that the first Friday in October each year would henceforth be World Smile Day®. Ever since that first World Smile Day® held in 1999, it has continued every year in Smiley's hometown of Worcester, MA and around the world.

This year's theme is "Do an act of kindness. Help one person smile"!

Established in 2001, the Harvey Ball World Smile Foundation pays honor to the name and memory of Harvey Ball. Harvey Ball's principle that each one of us has the ability to make a positive difference in this world lives through this organisation. Just like Harvey Ball, the foundation also believe that any effort to improve the world, no matter how small, was worthwhile, even with a simple smile and a kind act. In furtherance of that philosophy the Harvey Ball World Smile Foundation focuses on small, grass-roots charitable efforts that otherwise receive little attention or funding. 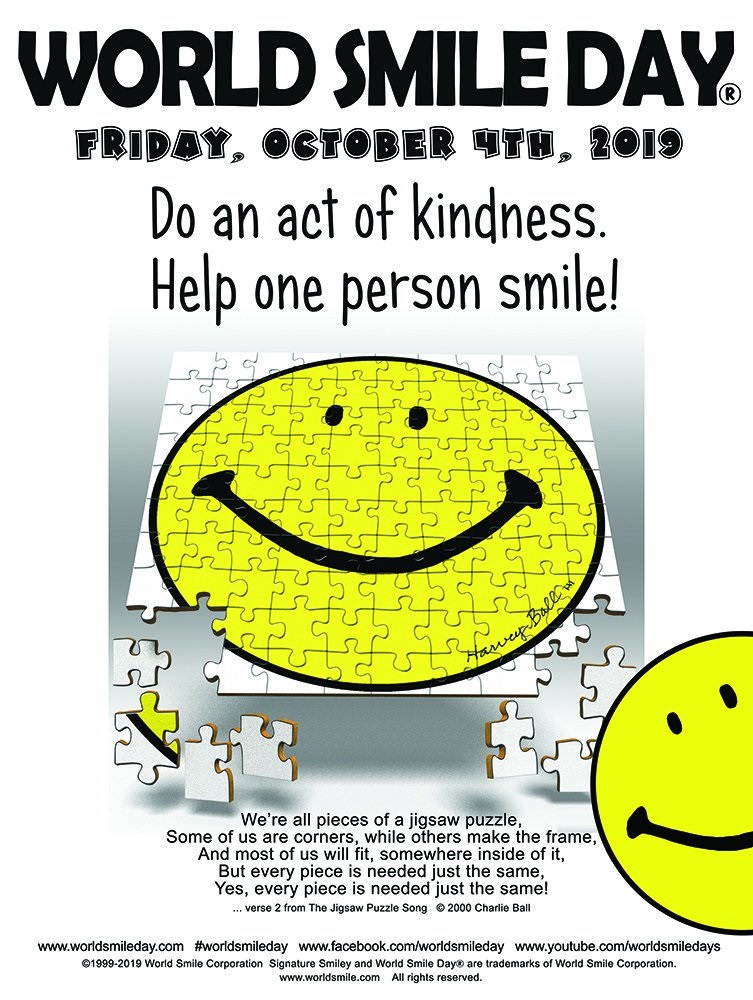