Hypertension Qigong Stress management Wellness Tension Movement Energy Gong ...
Want to find out my availability, pricing or opening hours? Click on Send Me Details Now to get started.
Request a booking
Send me details now
Clicking on the Send Me Details Now button opens an enquiry form where you can message Anthony Barker directly.

Anthony Barker has been studying Qigong for over 20 years.

The word Qigong (Chi Kung) is made up of two Chinese words. Qi is pronounced chee and is usually translated to mean the life force or vital-energy that flows through all things in the universe. The second word, Gong, pronounced gung, means accomplishment, or skill that is cultivated through steady practice. Together, Qigong (Chi Kung) means cultivating energy, it is a system practiced for health maintenance, healing and increasing vitality.

Qigong creates an awareness of and influences dimensions of our being that are not part of traditional exercise programs. Most exercises do not involve the meridian system used in acupuncture nor do they emphasize the importance of adding mind intent and breathing techniques to physical movements. When these dimensions are added, the benefits of exercise increase exponentially.

Those who maintain a consistent practice of Qigong find that it helps one regain a youthful vitality, maintain health even into old age and helps speed recovery from illness. Western scientific research confirms that Qigong reduces hypertension and the incidence of falling in the aged population. One of the more important long-term effects is that Qigong reestablishes the body/mind/soul connection.

My name is Anthony Barker I have been involved in Qigong for over 20 years.

I started studying Qigong in 1992 with Grand Master Jack Lim and started teaching in 2010. In November 2011, I was given the title of Qigong Master by Jack Lim.

This journey has taken me to China on several occasions, in 1994, 2003, 2010 and 2014, where I studied and trained with several Masters and Grand Masters at some beautiful ancient Qi locations. I absorbed this beautiful Qi from Mt Tianshan, Mt Wudang and Purple Cloud Taoist Temple. Part of my study was at the Beijing Qigong hospital with Grand Master Dr Xu.

I’m often asked what Qigong is, so I quote Grandmaster Jack Lim:

“Of all the knowledge and wonderful works of art that China has to offer the world, none is so precious as this knowledge of the Qi, for this is not only a doorway to peace of mind and optimum health, the knowledge of Qi energy illuminates the path to the ultimate understanding of the universe.

“The ancients have developed to a fine art the mastering of this life-giving force. This training is called Qigong, and consists of movements, special breathing and stillness meditation.

Our hearts open to this life force and without effort we allow it to flow through all the cells in the body nourishing and rejuvenating them, as the mind becomes still we allow ourselves to feel this wondrous flow of the universe.

I teach the Great Stork Qigong, which was taught to me by Jack Lim, this involves very simple movements which allow us to connect to this flow of Qi; as the ancients discovered it through watching and connecting to the spirit of these wondrous birds.

Qigong will help you to regain balance in your life Physically Mentally and Spiritually.

By opening the energy pathways in the body called Meridians, relaxing and allowing the Qi to naturally flow it will help clear away the stagnate Qi,allowing the rejuvenated Qi to flow.

As well as The Great Stork we will pracatice Stillness Meditation (Micro Cosmic Orbit) to balance the Movement and strengthen the Qi flow. 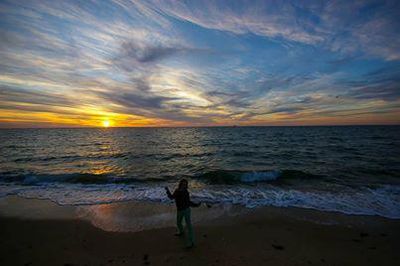