Dr Martin liu had a significant effect on the treatment of post-herpetic Neuralgia (chronic shingle) by using hot needles and other methods. The cure rate is over 90% and it was the leading level in Australia.

Specialising in Pain Treatment:
From 1982, Dr Liu began research into acupuncture and meridian points. He invented 120 new meridian points, and used this new knowledge to train more than 3,000 acupuncture practitioners in Australia and China.

Using this method, he obtained good results in pain treatment. In 1994, he was awarded a Chinese medical specialist certificate of honour by the Science and Technology Board. He recently published new acupuncture point studies, and one informational point for common diseases in China.

Specialising in Cancer Rehabilitation:
In 1989 Dr Liu began researching cancer after his mother was diagnosed with cancer of the large intestines. The cancer was widespread, and she was told by doctors that she had only six months to one year remaining. Dr Liu researched the best cancer treatment methods in China and internationally, and utilised a traditional Chinese medicine herbal formula that restrains cancer cells. Used in combination with medical qi gong to treat his mother, her quality of life improved markedly after six months. His mother lived a further 18 years in Beijing.

In 1986, in order to expose this new method of treatment to more people, Dr Liu collaborated with renowned cancer treatment specialist Zhang Da Ning to publish practical guidance for cancer treatment, which became a widely selling book in Beijing.

In 2006, Dr Liu released his 423 Meridian qi gong DVD, for which he has obtained the copyright and patent. This year, he published his book The Meridian Health Secret in English, which has great benefits for cancer rehabilitation.

If cancer patients find the treatment by Western practitioners inadequate, Dr Liu believes that a combination of Chinese herbal formulae and medical qi gong can help to reduce symptoms, boost the immune system, and increase overall quality of life.

Martin Liu is a traditional Chinese medicine doctor registered with the Victorian Chinese Medicine Registration Board. Before arriving in Australia, he was a senior research fellow of Beijing Acupuncture & Meridian Research Institute, and a professor in the TCM department of Ji Lin Military Medical University.

After graduation from the Air Force Medical University in 1982, he obtained degrees from the Institute of Orthopaedics and Traumatology, Institute of Acupuncture and Beijing Xinhua University Chinese Medicine Department.

In 1984, due to noteworthy results in his work, he was appointed by the government to the post of Chinese medical specialist for high-ranking Chinese leaders, including He Chang Gong and former defence minister Chi Hao Tian. 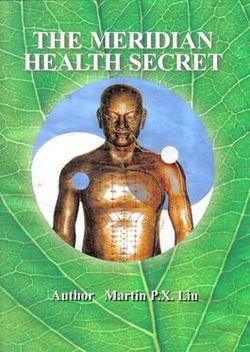