Want to find out my availability, pricing or opening hours? Click on Send Me Details Now to get started.

Research has shown that the use of hypnosis for childbirth results in shorter labours, reduced use of pain medications, higher Agpar scores, reduced surgical delivery and reduced post-partum depression.

The HypnoBirthing programme is based on the book Childbirth Without Fear, by Dr. Grantly Dick Read. The founder of HypnoBirthing, Marie Mongan, recognised that Read’s patients were actually going into hypnosis and therefore added hypnotherapy to his basic philosophy.

Hypnosis, which is taught to couples attending HypnoBirthing sessions, is a natural-occurring experience and can spontaneously occur many times a day. Daydreaming, not being aware of the passage of time, “automatic” driving, being absorbed in a book or movie, listening to music, being able to shut out one’s surroundings by concentrating very hard on something else, are all examples of a hypnotic state. What separates hypnotherapy from the above activities is how the practitioner uses the hypnotic state.

Read’s premise is that civilisation and culture have influenced the way a woman thinks of childbirth and, because of this, fear and anxiety concerning labour were introduced.

Researchers in the field of psychoneuroimmunology are providing evidence about the ways in which negative emotions generated by stressors can be translated into physiological changes. In pregnancy, fear and stress have a negative effect on the physiology of the body in both the pregnant women and her developing foetus.

Perceptions of fear and stress activate the sympathetic branch of the autonomic nervous system and activate the “fight or flight” response, thereby causing the secretion of stress hormones which prepare the body to engage in a protection response which results in both tension and a constriction of blood vessels in the body. As a result of this protection response, tension in the body gives rise to resistance and tension in the muscles in the womb which results in the pain experienced in childbirth. Also, blood flow is shunted away from the reproductive organs resulting in a lowering of oxygen supply to the baby.

In HypnoBirthing, fear is reduced by suggestions which are given to the mother-to-be to free her from the social and/or cultural conditioning she has received from family members, friends and colleagues, many of whom seem to delight in telling “horror stories” of either their own birth experience or those of others. She is also given positive suggestions in the form of imagery, where she sees her body working as nature intended, and by post-hypnotic suggestions of deep relaxation and calm which will take effect as soon as she goes into labour. Tension is further relieved by teaching the mother-to-be controlled breathing and relaxation through self-hypnosis.

The HypnoBirthing method of childbirth education is as much a philosophy as it is a technique. Its main advantages are the reduction of anxieties and fears, a calmer, more enjoyable birth, and a calmer baby.

“Unexplained infertility” actually means that there is no physiological reason for a woman not to become pregnant. Although women often feel helpless upon learning of this “condition”, it is actually good news. In the absence of a pathological impediment, many women can be helped to achieve fertility by exploring prior programming or emotional blocks.

Negative feelings left unexpressed or unresolved, hold considerable energy which can block conception. Unexpressed emotions such as anguish, guilt or shame often felt after a termination, or the grief felt after a miscarriage, can create extreme emotional conflict, which affects every cell of the body and can cause or compound reproductive problems [see table 1].

The chemistry of our bodies can be altered by our every thought and feeling. The powerful mind-body connection is bi-directional - the health of one depends on the health of the other. Neurotransmitters (the brain’s chemical messengers) are the powerful chemicals that regulate numerous physical and emotional processes and have a profound influence on overall health and well-being. If neurotransmitter levels are disrupted by negative and/or stressful thoughts and feelings, signals between the mind and the body are affected and physiological problems occur [see Table 2].

Stress (or more specifically, one’s inability to cope with stress) is one of the major problems of unexplained infertility. Conceiving — whether the couple is attempting to conceive naturally or with medical assistance such as IVF — is wrought with stress. For both of them, there is the worry about why they aren’t conceiving when all the tests appear to be normal. For the woman, there is the added disappointment each month when her period arrives which, if recurrent, can lead her to fear that she may never be a mother. If she’s undergoing IVF treatment there are the drugs and procedures (plus the financial burden) that are anxiety-provoking. If she’s also working in a stressful workplace environment, this only adds to the stress. Then there are the constant questions and, sometimes, hurtful references from family and friends about her inability to have a family.

There is also ongoing stress for her husband or partner and semen quality and motility can be affected by this. In addition to undergoing intrusive tests and the worry over finances (and possibly a stressful job), he also has to contend with a woman who can be (understandably) quite emotional and upset. When this happens, it’s often difficult to know exactly what to do and say and women can sometimes feel that they are not getting emotional support because the words and actions they’re expecting are not forthcoming. This misunderstanding just adds further fuel to the fire.

Hypnosis has been proven to be very effective in removing stress and unresolved issues about having a baby. In an article by Suzy Greaves entitled “Can Hypnosis Help to Make You Pregnant” Dr. Elizabeth Muir, a clinical psychologist working with hypnotherapy for infertility, explains how hypnosis affects the hypothalamus (the neural centre at the base of the brain linked to the pituitary gland) and controls the flow of hormones in the body.

The hypothalamus is sensitive to stress and acts as a bridge between the emotional and physical, turning emotional messages into physical responses that affect hormone levels.

Two further studies by Alice Domar support Muir’s theory. In the first study, published in 1999 in the Journal of the American Medical Women’s Association, 42% of 132 infertile women conceived within six months of completing a mind-body programme. In the second study, published in 2000 in the Journal of Fertility and Sterility, 55% of the previously infertile women conceived, compared to 20% of the control group who used no mind-body techniques.

Hypnotherapy therefore reduces stress and increases confidence, instilling a sense of control, which in turn maximises the chances of conceiving naturally and/or increase the success of medical assistance.

Table 1.
Issues that are blocks to conception.

Table 2.
The physiological effects of stress, negative feelings or emotions, on fertility.

Background and aim: HypnoBirthing, which is steadily increasing in popularity both in Australia and overseas, is a set programme consisting of 10-12 hours of instruction for couples approaching the later stages of pregnancy and birth. A survey was carried out to investigate how Australian participants attending the HypnoBirthing programme between 2007 and 2010 compared to other studies where hypnosis was used for childbirth.

Results: The average length for both stages of labour was shorter in the HypnoBirthing group compared to general population figures. Caesarean section rates were lower, as was the use of gas and epidurals. Of the 81 participants, 46 (51%) did not use any pain medication at all and the overall discomfort level for labour and birth was 5.8 out of 10 with 32% of the participants scoring under 5.8, including two participants who recorded zero discomfort.

Conclusion: Women attending the HypnoBirthing programme demonstrated similar results to those found in other research in hypnosis for childbirth. However, the findings also demonstrated some added benefits of HypnoBirthing. The majority of women reported feeling more confident, relaxed, less fearful, focused, and more in control. They also commented on the ease and comfort of labour and birth and the satisfaction of having their partners involved and supportive.

FIRST AUSTRALIAN TRIAL ON HYPNOSIS AS A TREATMENT FOR IRRITABLE BOWEL SYNDROME.

Volunteers for the trial were randomly assigned to one of three groups: two experimental groups (either holistic or standard gut-directed hypnosis) and one control group (relaxation therapy). Throughout the trial, participants completed the Bowel Symptom Severity questionnaire which assessed the degree to which IBS symptoms interfered with their daily lives, and the SF-36 which broadly related to the participants quality of life, mental health, and social activities.

All participants demonstrated improvement in the overall severity of their individual IBS symptoms and quality of life at the end of the treatment period, with the holistic group (blue) having a numerically better outcome than the other two groups.

Psychological treatments, such as hypnotherapy, are rarely suggested to IBS patients as, up until now, medication (such as antispasmodics, antidepressants, anti-diarrhoeals and laxatives) has been the treatment of choice. Considering the high cost of medication, repeated visits to medical practitioners, and the high prevalence of stress, IBS suffererswould obtain a great deal of benefit from programmes such as hypnotherapy.

As result of this trial, a 7-week treatment protocol has been set up to address both the physiological and emotional/psychological aspects of IBS. This will be conducted at Sydney Essential Health,130 Edgecliiff Rd., Woollahra, Sydney. 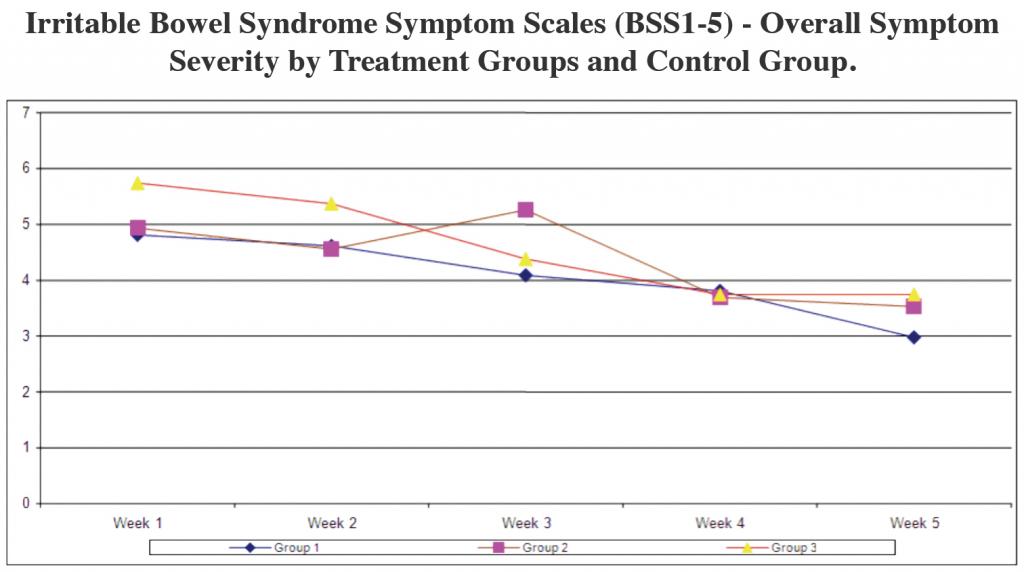 Send Me Details Now
You are not logged in