In muscle testing we are not testing the strength of the muscle. It is a biofeedback we are monitoring. The truly amazing aspects of muscle monitoring is that the response can indicate such a wide variety of problems.

Kinesiology has an interesting history. The science of manual muscle testing was first developed in the early 20th century by a Boston orthopaedic surgeon, R.W. Lovett. Lovett used muscle testing to analyse disabilities resulting from polio and nerve damage. He applied muscle testing to trace spinal nerve damage because muscles that tested 'weak' often had a common spinal nerve. He first published his findings in 1932. Henry and Florence Kendall modified and systematized Lovett's ideas and in 1945 published their pioneering book, 'Muscle Testing and Function.' And so, muscle testing became a new science. Dr. George Goodheart, a chiropractor, observed Kendall and Kendall's work and found that muscle testing was not only diagnostic it was therapeutic as well. By combining his discoveries, Goodheart pioneered a system that brought together work done by his predecessors: Chapman's points for lymphatic function; Bennet's points for vascular function; the origin/insertion technique for muscular problems; ancient eastern meridian and acupuncture methods and muscle testing for feedback in both diagnosis and therapeutic benefits. When the body is stressed (diseased), the muscle associated with that disease may become imbalanced and weak. The associated Chapman reflex points may become tender; the Bennet reflex point may become active, and the associated meridian flow may be disturbed. Many other people have been involved in the development of kinesiology, bringing it to the brilliant format available now. John Thie, Alan Beardall, John Barton, Paul Dennison, Charles Krebbs and Andrew Verity to name a few.

In muscle testing we are not testing the strength of the muscle. It is a biofeedback we are monitoring. The truly amazing aspects of muscle monitoring is that the response can indicate such a wide variety of problems. The muscle may respond by being weak because of a physical factor, (a sore muscle for example); because of a disturbance in the function of its related organ system (blocked or restricted lymph or blood flow); because of a disturbance with its associated meridian (blocked energy flow); or because of a disturbing emotion or thought. If we test a muscle and it is strong and locks, and then ask a person to think about their mother, the muscle may suddenly give or unlock.

This indicates to the kinesiologist that something has interfered with the integrity of the neurological flow between the muscle and the central nervous system preventing normal muscle function. In other words there is a stress related to mother, most probably relating to an unresolved issue that occurred when they were growing up. The client may think he gets on famously with his mother, but this is the most powerful aspect of kinesiology - it allows us to eavesdrop on our subconscious. We think we run our body consciously, yet if you consider it from a physiological point of view, even when you are standing still there are hundreds of muscles working to keep you upright. Consciously you are not involved, but your subconscious is. Most of the information goes directly into the cerebellum, the basal ganglia and other subconscious parts of your brain. Only a small amount of the information is passed into your conscious cortical areas for you to perceive. In a sense what you perceive consciously is only a summary statement of everything that is happening subconsciously. In many ways the advent of kinesiology in the late 20th century indicates that the ancient eastern energetic healing arts have combined with western physiological healing sciences.

Mind and body are being reunited and the person who seeks healing is empowered with the responsibility of his/her own health. Kinesiology is the tool we need to access the subconscious mind to find out what is really going on, what is maintaining the diseased state of the body.

To book an appointment or to ask any questions please contact Joanne on 0419 567 389 or 'Make an Enquiry' below.

The difference between homoeopathic medicine and western medicine is often misunderstood. Drawing mostly from Coulterâs (1973-1994) divided legacy, I will outline the many ways the two methods diverge in viewpoint 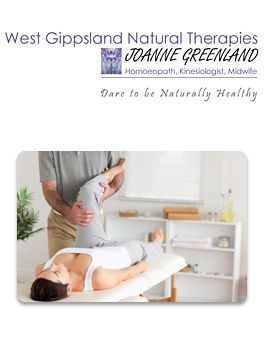